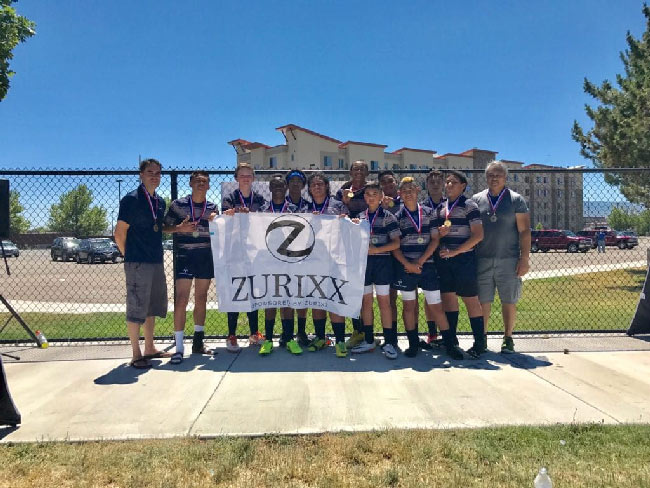 July 24, 2017 – Zurixx is proud to announce that the Hunter Junior Rugby 7s U14 team won the Utah State Championship this past spring season!

On their way to the State Championship, Hunter faced down the #1 U14 team in the country and won. The U10 and U12 teams went incredibly far as well but narrowly missed the finals, and while the U6 and U8 leagues do not have playoffs, we are told they played exceptionally as well.

In January 2017, Zurixx announced their sponsorship of Hunter Junior Rugby 7s and donated $1,500 in time for the Spring 2017 season. The money donated by Zurixx was primarily used for scholarships for young athletes whose families could not afford the registration fee. The additional money was used for coaching certificates, team equipment, and a team BBQ to celebrate the end of their inaugural season.

The Hunter Club provides rugby teams for local residents ages 5-14 and is a member of Utah Youth Rugby, a nonprofit organization whose mission is to develop both rugby skills and life skills such as honesty, confidence, teamwork, accountability, sportsmanship, trust, and hard work.

The majority of Hunter’s players are from the West Valley and Magna areas, which are traditionally low-income areas, and we are happy that Zurixx can play a role in ensuring all can have an opportunity to develop these life skills through the sport of rugby.

Jim Carlson, CEO of Zurixx, was ecstatic to hear of the success of the Hunter Club. “I know how good it feels to be part of a team that succeeds. You feel an immense sense of pride knowing you gave it your all and it paid off. I feel that same pride again knowing we were able to support those young rugby players, and I cannot wait to continue this sponsorship.”

This is not the first time that Zurixx has been a supporter of youth rugby and the local community. In September 2016, Zurixx was a title sponsor for the Utah Youth Rugby Fall 7s Series, an intense competition between the Utah Youth Rugby clubs. The following month, Zurixx powered the female-only Pink 7s rugby tournament that involved some of the best high school girls rugby teams from across the U.S. Zurixx and Utah Youth Rugby partnered with the Huntsman Cancer Institute for the tournament to honor breast cancer awareness month.

For the Utah Youth Rugby Pink 7s, Zurixx flew Jillion Potter, Captain of the 2016 USA Olympic women’s rugby sevens team. Jillian spoke to players and their families about her 2014 battle with Synovial Sarcoma cancer, as well as presented Zurixx’s $50,000 donation to the Huntsman Cancer Institute. Unfortunately, the cancer returned, and Jillian is currently seeking treatment in Texas. Zurixx was honored to donate to Jillian’s crowdfunding page.

Zurixx continues to be a proud supporter of cancer research and awareness and youth rugby by giving back to the community every way that they can. Zurixx looks forward to continuing their partnerships with both the Hunter Club as well as the Huntsman Cancer Institute.